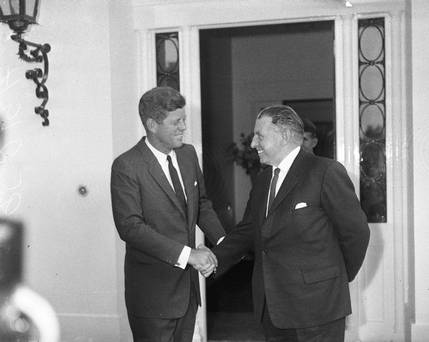 Kennedy formally meets Lemass in Ireland at the American Embassy.

50th Anniversary of Taoiseach Lemass’s Visit to the U.S.

Following the tremendous success of his tour of Ireland in May, 1963, President Kennedy invited the Taoiseach Sean Lemass to visit him in Washington D.C. the same year. The Taoiseach arrived in Philadelphia on October 11th, 1963, visited with the mayor and the American Ambassador to Ireland, and continued on to Chicago. Luckily, there was no need to worry about transportation – President Kennedy broke precedent and provided Air Force One (the presidential jet) for Lemass’s use.

On October 15th, Lemass was welcomed at the White House by Kennedy, who was determined that Lemass’s reception be as impressive and enthusiastic as his own had been in Ireland. In a later interview, Lemass recalled the circumstances of the motorcade Kennedy took him on:
“He was, I think, a little bit worried that I wouldn’t get in Washington anything like the same turnout of people along the street for the ceremony there that he got in Dublin, and not doubt that this would have been so. But he apparently gave orders that all the Civil Service staffs in Washington were to take the morning off on the condition that they be there. [Laughter] And there was quite a considerable turnout along the main thoroughfares. But this, I gathered, was contrived for me.”
The Taoiseach later remembered Kennedy as an extremely inquisitive, lively man. Lemass remarked of Kennedy in Ireland; “He was continuously asking questions about everything he saw, inquiring about the people who, he’d been introduced to, allowing no statement which interested him to pass without requiring an elaboration of it.” In Lemass’s opinion, this characteristic of the President was not a political gambit to endear himself to the people, but rather a lifelong “natural characteristic of him.” This inquisitiveness continued when Lemass arrived in Washington, as while the two did discuss relations between Ireland and the U.S., in large part his visit served as a recollection of Kennedy’s time in Ireland, as he asked about “the people he had met [there], and about things he had seen in progress [there], what had happened, and so on.”

Lemass was very much put at ease by the President’s company in Washington, as Kennedy constantly found the humor in any situation. Lemass shared one incidence:
“On that occasion we proceeded, I know, along a corridor of the White House from the room where we assembled in solemn processional order down the stairs. But in the middle of the corridor he said, “By the way, have you seen Lincoln’s bedroom?” And everyone stopped. The door to the bedroom was opened, but what he hadn’t known was that his sister had been using the bedroom, and her underclothes [Laughter] all were scattered over the floor. To his office, he says, very hastily. But again, this was the type of situation you’d expect. And then the son, young John [John F. Kennedy, Jr.], came rushing out of another room with a lump of bread in his hand, again interrupting the ceremony of the proceedings – escaped from his nurse to be with his father.”

Lemass’s visit served not only as a platform to promote Irish-American cooperation, but also to strengthen the friendship between the two heads of State. He spent the remainder of his time in Washington speaking to the public, in discussions with the President himself, and as a guest of honor at a state dinner at the White House. Follow the link below to a recording of Kennedy’s welcoming address: 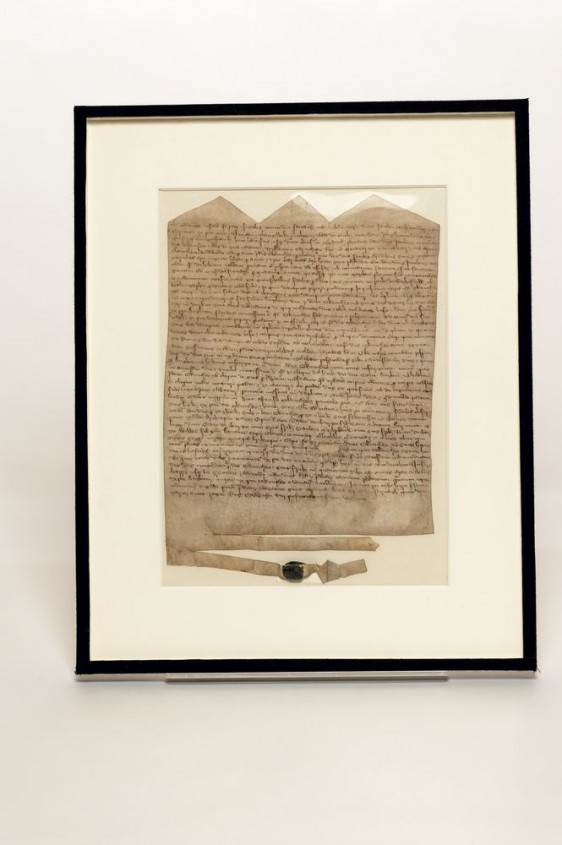 This original treaty between Kennedy’s ancestors and a neighboring family was gifted to Kennedy by Lemass during the President’s visit to Ireland. It was displayed prominently in the White House during Lemass’s stay – a gesture that, while touching, he suspected was purely for his benefit.

Not Just a Social Call

State celebrations and ceremonies aside, Lemass used his trip to improve Ireland’s standing in the U.S., and most importantly, lobbied for American investors to take an interest in Irish industries. In this regard his visit was extremely successful – he left for Dublin with a promise from a Boston company to lease factory space in Shannon, and several other companies began making deals in the subsequent weeks.
While Lemass’s visit in many ways mirrored Kennedy’s in Ireland, there was one clear deviation – Lemass spoke openly about the partition of Northern Ireland and Ireland, and of his hopes for reunification. He brought up the topic twice – first in a press club luncheon in Washington, and again in his address to the General Assembly of the United Nations when he travelled to New York. This drew criticism from Northern Ireland Prime Minister Terence O’Neill, who disparaged Lemass for remarking on a subject that Kennedy himself had remained circumspect about.
In their discussions, Kennedy and Lemass spoke of increasing Irish-American cooperation, and Kennedy proposed a joint project to further the development of fisheries in the North Atlantic – a subject which, as a New Englander, apparently fascinated the President. While no tangible project materialized following Kennedy’s assassination the next month, a team of American experts did perform a survey of Irish fisheries in 1966, which was “quite useful to us,” according to Lemass.

The Taoiseach departed from Boston to Dublin on October 20th, wrapping up his tour of the U.S. The gravity afforded to him during his visit by President Kennedy speaks to both Kennedy’s personal relationship with Lemass, and also the President’s intention to establish the newly formed Ireland as an important ally to the United States. Although the young president did not live to witness the results of his effort, his interest in Ireland cemented the familial bond between the two countries.

Sources:
Carroll, James R. One of Ourselves: John Fitzgerald Kennedy in Ireland. Bennington, VT: Images from the Past, Inc., 2003.