The JFK Homecoming App is a complement to an Exhibit which will run at the National Library of Ireland from June 21 until August 15, 2013. The exhibit is a collaboration between the National Library, the National Archives and the Embassy of the United States in Ireland, in partnership with the JFK Presidential Library in Boston and RTÉ Archives, and looks at the context of John F. Kennedy’s historic visit to Ireland in June 1963.

The App include’s maps, photos, timelines and content which will allow those interested in the Kennedy visit to bring the exhibit with them as they follow the Kennedy trail. A fun “I was there” photo app even allows those who missed the visit to imagine themselves into the scene. 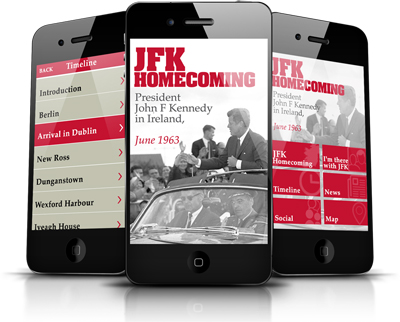