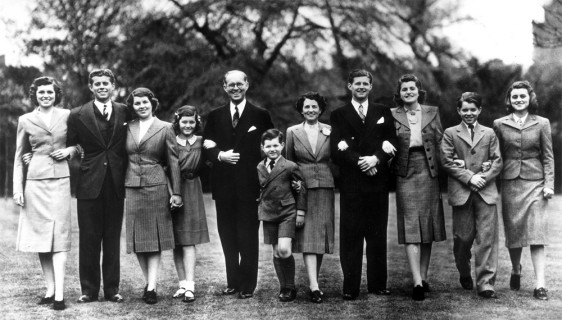 A model of Irish Catholic achievement in America: family portrait of the prosperous Kennedys. taken in 1938

Full of energy and ambition, Jack’s father worked very hard at becoming a successful businessman. When he was a student at Harvard College and having a difficult time fitting in as an Irish Catholic, he swore to himself he would make a million dollars by the age of 35. There was a lot of prejudice against Irish Catholics in Boston at that time, but Joseph Kennedy was determined to succeed. Jack’s great-grandparents had come from Ireland and managed to provide for their families, despite many hardships. Jack’s grandfathers did even better for themselves, both becoming prominent Boston politicians. Jack, because of all his family had done, could enjoy a very comfortable life. The Kennedys had everything they needed and more.

By the time Jack was eight there were seven children altogether. Jack had an older brother, Joe; four sisters, Rosemary, Kathleen, Eunice, and Patricia; and a younger brother, Robert. Jean and Teddy hadn’t been born yet. Nannies and housekeepers helped Rose run the household. Jack was very popular and had many friends at Choate, a boarding school for adolescent boys in Connecticut. He played tennis, basketball, football, and golf and also enjoyed reading. Jack graduated from Choate and entered Harvard in 1936, where Joe Kennedy was already a student. Like his brother Joe, Jack played football. He was not as good an athlete as Joe but he had a lot of determination and perseverance. Unfortunately, one day while playing he ruptured a disk in his spine. Jack never really recovered from this accident and his back continued to bother him for the rest of his life.

On September 1, 1939 Germany invaded Poland and World War II began. In June 1940, Jack graduated from Harvard. Soon after graduating, both Joe and Jack joined the Navy. Joe was a flyer and sent to Europe, while Jack was made Lieutenant (Lt.) and assigned to the South Pacific as commander of a patrol torpedo boat, the PT-109. When he returned home, Jack was awarded the Navy and Marine Corps Medal for his leadership and courage. With the war finally coming to an end, it was time to choose the kind of work he wanted to do. Jack had considered becoming a teacher or a writer, but with Joe’s tragic death suddenly everything changed. After serious discussions with Jack about his future, Joseph Kennedy convinced him that he should run for Congress in Massachusetts’ eleventh congressional district, where he won in 1946. This was the beginning of Jack’s political career. As the years went on, John F. Kennedy, a Democrat, served three terms (six years) in the House of Representatives, and in 1952 he was elected to the U.S. Senate.

Soon after being elected senator, John F. Kennedy, at 36 years of age, married 24 year-old Jacqueline Bouvier, a writer with the Washington Times-Herald. Unfortunately, early on in their marriage, Senator Kennedy’s back started to hurt again and he had two serious operations. While recovering from surgery, he wrote a book about several U.S. Senators who had risked their careers to fight for the things in which they believed. The book, called Profiles in Courage, was awarded the Pulitzer Prize for biography in 1957. That same year, the Kennedys’ first child, Caroline, was born.

John F. Kennedy was becoming a popular politician. In 1956 he was almost picked to run for Vice President. Kennedy nonetheless decided that he would run for President in the next election. He began working very long hours and traveling all around the United States on weekends. On July 13, 1960 the Democratic party nominated him as its candidate for President. Kennedy asked Lyndon B. Johnson, a senator from Texas, to run with him as Vice President. In the general election on November 8, 1960, Kennedy defeated the Republican Vice President Richard M. Nixon in a very close race. At the age of 43, Kennedy was the youngest man elected President and the first Catholic. – text from the JFK Presidential Library.

There was a lot of prejudice against Irish Catholics in Boston at that time, but Joseph Kennedy was determined to succeed.